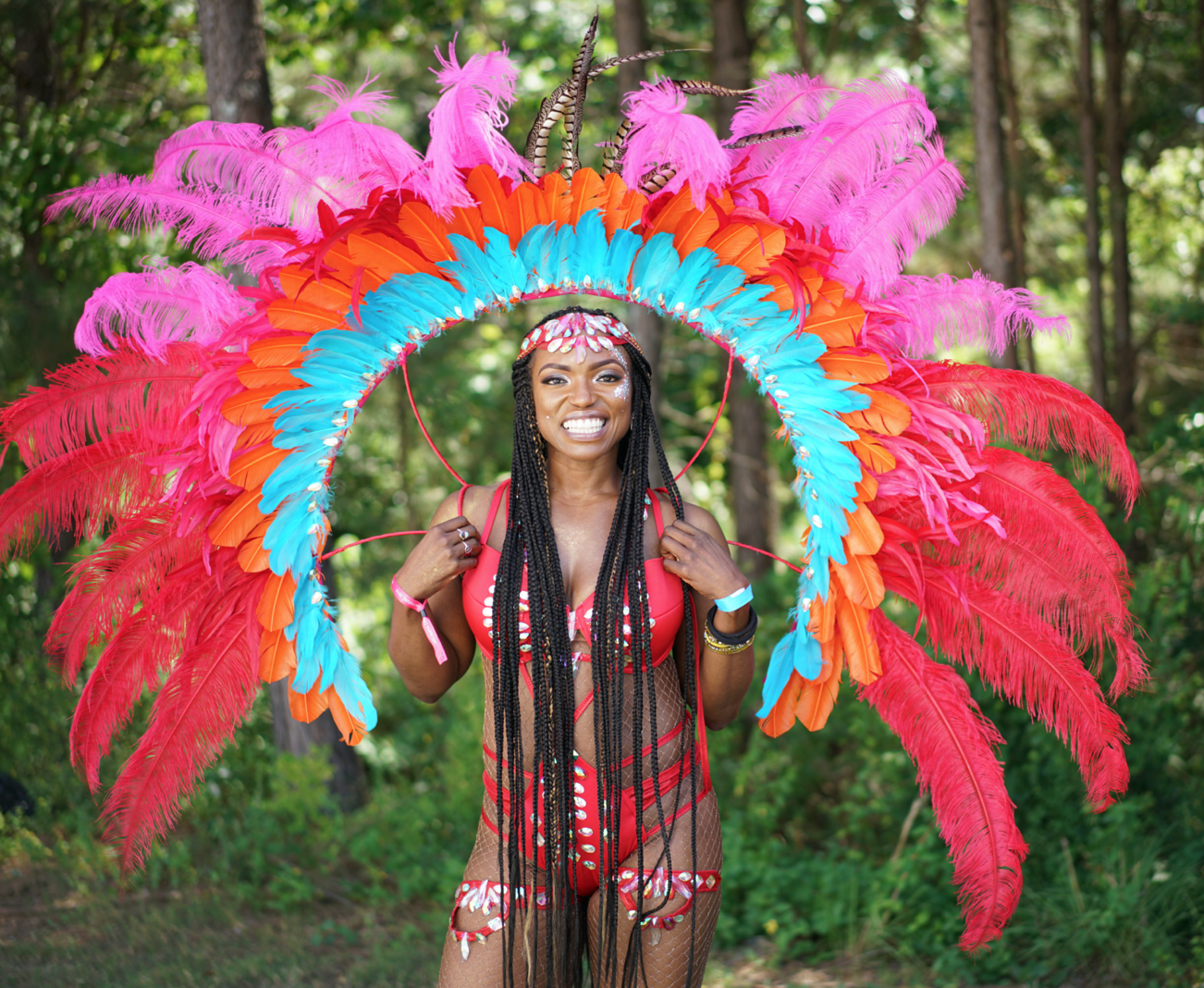 Today we will catch up with Erica Dixon, the founder of Unity Mas Band. Read all about how she came to love Carnival and started her own mas band.

1. Tell me a little about yourself and your journey into playing mas.

My name is Erica Dixon and I live in North Carolina and I spent my early childhood growing up in Washington, D.C. I obtained my Bachelors and Master’s Degree from North Carolina Central University (NCCU), a historically black college. Early on, I started my career in academia as a professor in the PE Department and Director of Campus Recreation at NCCU. Fitness is my passion and it wasn’t a difficult choice to go from part-time to full-time. I now have over 20 years of experience in the fitness industry, which uniquely led me to my love of Soca music and playing mas.

My gateway to playing mas all started with my introduction to Soca music through teaching fitness classes. Early on, I used Soca in cycling classes but it wasn’t until I began teaching Zumba® that my love for Soca music grew exponentially! After being invited to perform on stage at the 1st Carnival in Raleigh, NC, I began to learn about the cultural significance of the festival, food, and music. It was then that I understood that I wasn’t as much of an “outsider” being an American. I started understanding and looking for what connected me and why I was so instinctively drawn to this culture and it music. 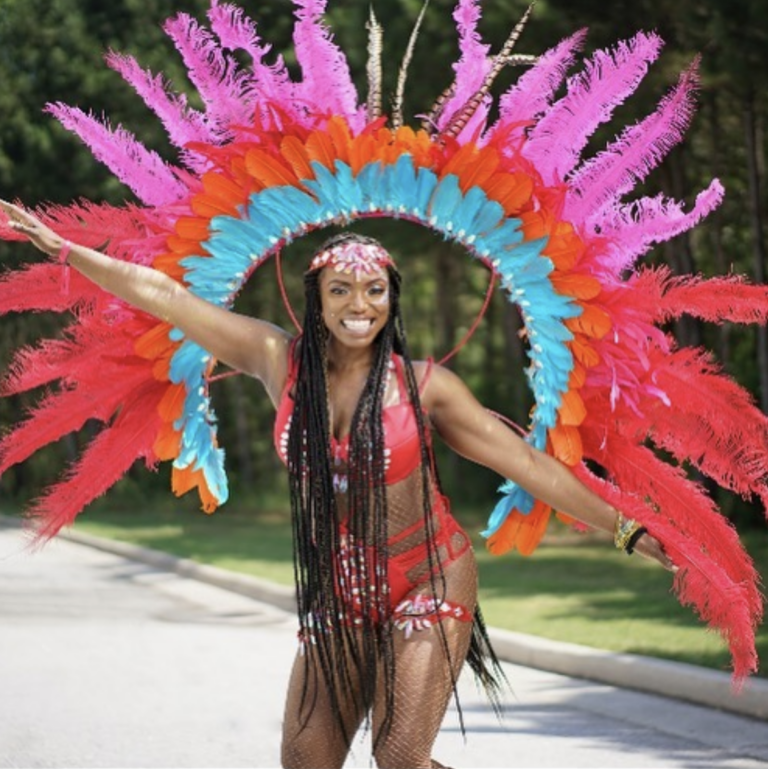 2. What made you decide to start your own mas band?

In 2013, I was invited to host a major fundraiser for Raleigh Carnival and this would be my first 1st year as a band leader of a fitness-based exhibition band comprised of instructors and class participants who performed routines on the road. At that time, the committee was made up of a group of women representing 7 Caribbean countries. The following year, Unity Mas Band was formed and became an official “mas band” and we have been growing ever since.

3. What challenges did you face starting your own band?

Early on I had many challenges and some of those challenges I face today. There are the financial challenges because managing a mas band is extremely costly and no matter how much you plan and budget there are always those unforeseen unexpected and sometimes unimaginable circumstances that occur that will cost money. Simply put, there are many times that you put out more money than you bring in and several factors can be the cause.

4. One thing I love about your band is that one costume can be worn at different carnivals. How far in advance does it take for you to prepare your costumes for the year?

We start planning our costumes in late August into early September of the prior year.  We select the theme and work closely with the designer who brings the collection to life.

The most rewarding thing about running a band is to witness the beautiful masqueraders in costume on the road and the joy they experience while playing mas.

6. What is your least-favorite thing about running your own mas band?

My least favorite thing about owning a mas band is the organization and preparation that occurs two weeks prior to Carnival. Actually Distribution week is my least favorite week of the year! After all the costumes are handed out and every masquerader has all of their costume pieces, it quickly becomes the happiest day of the year!

7. What is it about UMB that you feel attracts new and returning masqueraders?

I think that it is the fact that many of us are bonded through our love of fitness and Caribbean music. UMB was started out of my fitness class. I was also a leader in the fitness community so therefore, many instructors joined the band early on. At one point, 90% of the band was comprised of instructors and their students. Today the number is more like 75%.

The other factor is that as bandleader, I take a very “hands-on” approach. Some masqueraders have even commented that our band felt more like a concierge service within a band. I feel like this is the reason we attracts many beginners who have never played mas! I enjoy new masqueraders and I equally enjoy taking them through the steps of involved in playing mas. Also participating in more than one Carnival, allows us to stay connected to our masqueraders year round. Additionally we offer our masqueraders the option of wearing their costume more than once (which isn’t “the norm”) but makes sense for our masqueraders who many of which are first timers.

Aside from the points above, attracting new and returning masqueraders is largely due to our designer Christian Boucaud of Trinidad who does a spectacular job with keeping the costumes affordable and beautiful! She understands the “fiber” of our band as she has been there since the very beginning. Since she is a renowned apparel designer and boutique owner, she has a distinctive ability and gift to create beautiful cuts, fabric choices, and feather work that keep our costumes affordable yet elegant.

8. How has Unity Mas Band been impacted by COVID-19, and what new challenges are you facing as a business because of the pandemic?

The “unknown” has been the biggest challenge. Also dealing with new masqueraders during the pandemic has created challenges  because many of them do not understand how the process works. For instance, our 2020 year’s expenses, budgeting and planning started long before they placed an order and before the pandemic.

9. Who is your favorite mas designer, and why?

Christian Boucaud of Trinidad. She is known in Trinidad for her apparel designs and Monday Wear Collections. She is also an amazing costume designer and friend. She has designed our costumes for 3 1/2 years now.

11. How do you feel about mas bands that had to cancel due to COVID19, but won’t provide refunds?

I cannot speak for any other mas bands. I can’t give my opinion on why they didn’t provide refunds but I can identify with some bands’ decision to do what works for them. I also see how problematic it can be on either side as well. For instance in our case, if every masquerader was given a full refund, it would completely bankrupt the band and that would have ended us. I fund the band completely out of pocket. We usually end every year in the red because some unforeseen cost always arises. We do not receive sponsorships of any kind, which I hope to change in the near future. I plan, budget, and set pricing and ensure all the costs are covered by masquerader fees.

By the time the pandemic hit, we were only a little over 2 months away from our 1st Carnival and therefore all of our designs were created for year as well as supplies ordered for the approximate number of current and future masqueraders for 2020.

We offered refunds but we attached a $50 assessment fee. Again, the majority of our masqueraders agreed to transfer their payments towards the 2021 season.

12. What words of advice would you give to prospective band owners?

You must have a passion for serving other people. You must a have a passion and respect for the Caribbean culture! Be geuine! Be honest and transparent! Be strong and confident! Be knowledgable! Be someone who constantly wants to learn! Be flexible and open to change! This is the hardest job I’ve ever had in my life, and I love challenges.

13. What words of advice would you give to masqueraders?

Follow American Wines Matter and read her posts and blog..lol! Do your research on the Carnival and the culture! Play mas with friends if you are a 1st timer or join a concierge group!

14. What future projects/endeavors do you have in mind for Unity Mas Band?

My first project is to build a strong and committed team. Our next goal is to play mas outside of the United States. I would love for us to play mas in Trinidad Carnival within the next 3-5 years. 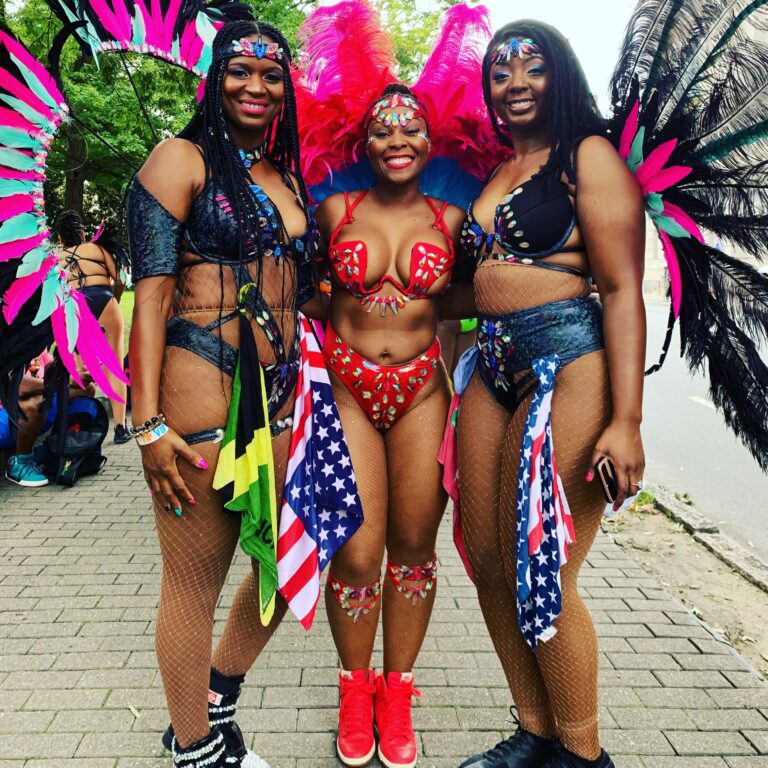 I played mas with UMB at Caribmask 2019 in Raleigh, NC on a complete whim due to stress at work.  Less than three weeks out, Erica pieced together what she had and even left gems in my bag for me to decorate my own bra.  UMB has a very strong family-community based vibe and I highly recommend UMB for your very first jump in the United States.  I am so proud of everything Erica Dixon has accomplished and wish her nothing but love and success in her future endeavors. 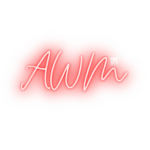